Saint Petersburg Institute of History of the RAS suffered an irreparable loss. One of the most outstanding scholars of the Institute Boris Vasilievich Ananich died on July 20, 2015 in the age of 84 years.
Boris Vasilievich has worked in SPbIH since 1956. Being a striking representative and a passionate patriot of the Petersburg school of history studies he was one of the most prominent specialists in the Russian history of the second half of the 19th – beginning of the 20th century, whose books and articles were well known by both home and foreign scholars and could be included in the capital of Russian science.

Boris Vasilievich was a wonderful man, democratic, cordial and really decent. He supported a lot of people and educated and trained a whole pleiad of progeny.

His death terminates an epoch in history of the Institute.

Let an outstanding scholar and honorable person be remembered forever.

Civil funeral will be on July 25, 2015 in the Saint Petersburg Institute of History of the RAS  at 12.00.
The funeral will take place at Smolenskoye cemetery at 14.00.

08.07.2015 admin Без рубрики Comments Off on Preliminary results of the conference “Penmen books and other mass sources of the 16th-21st centuries”

19th All-Russian scientific conference “Penmen books and other mass sources of the 16th-21st centuries”, timed to the centenary of Alexander Ilich Kopanev was conducted from July 1 till July 4. Opening, plenary session and sessions of sections on July, 1 took place at Saint Petersburg Institute of History of the RAS, while on July, 2-3 the conference’s sessions and round table were conducted at the Centre of history studies of Saint-Petersburg campus of the National Research University “Higher School of Economics”. More than 50 scholars from Moscow, St Petersburg, Novgorod, Pskov and other cities participated in this conference and delivered their reports.

About archive practice for students from Petrozavodsk State University

06.07.2015 admin Без рубрики Comments Off on About archive practice for students from Petrozavodsk State University 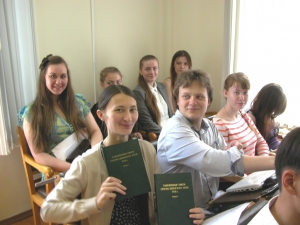 Scientific-research paleography practice for students from Petrozavodsk State University was conducted from June, 29 till July, 3 at Saint Petersburg Institute of History of the RAS. First-year, second-year and third-year students from the Department of History participated in this practice. During the period of practice the scholars of the Institute delivered summarizing lectures and carried out several practical studies on different subjects concerning Russian and European paleography, sigillography (sphragistics) and some other problems of source studies of Middle Ages and Modern History.