The Paleographic Room of Academician Nikolai Petrovich Likhachev is recreated

28.12.2022 spbiiarhiv Без рубрики Comments Off on The Paleographic Room of Academician Nikolai Petrovich Likhachev is recreated 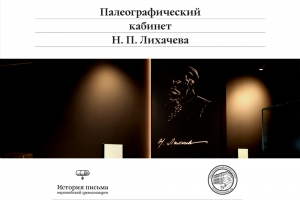 On December 26, 2022, the Paleographic Room of Academician Nikolai Petrovich Likhachev was recreated at St. Petersburg Institute of History of the Russian Academy of Sciences within the framework of the project “The History of the Writing of European Civilization”. The paleographic hall, intitially was opened in 1918 and was intended to acquaint students with writing patterns and documents from different eras. The new exposition is made for historians, philologists, art historians, students of the humanities, as well as anyone interested in humanitarian history. In the recreated Palaeographic Room in the open storage form, genuine Western European and Russian documents of the 12th-19th centuries from the rich funds of the scientific and historical archive of St. Petersburg Institute of History, located in the House of Academician N.P. Likhachev are presented.

The first visitors to the Palaeographic Room were journalists who regularly collaborate with St. Petersburg Institute of History of the Russian Academy of Sciences. The guests were told about the new exhibition by scholars – Aleksey Vladimirovich Sirenov, Varvara Gelievna Vovina, Tatyana Anatolyevna Bazarova, Ivan Dmitrievich Travin and project designer Egor Anatolyevich Bogachev.

Answering the questions of journalists about the possibilities of visiting a new, bright exhibition space, presenting unique documents in a multimedia “frame”, A.V. Sirenov and V.G. Vovina noted that the Paleographic Room will be available not only for researchers, participants in scientific events or guests of SPbIH of the RAS, but also for a wide audience. Such excursions are planned to be held according to a special schedule and pre-registration. SPbIH of the RAS also plans to work with schoolchildren in the Paleographic Room.

The creation of the Paleographic Room of Academician N.P. Likhachev was one of the results of the implementation of a three-year grant from the Ministry of Education and Science “History of the Letters of European Civilization”, work on which is being completed in the outgoing year.

After the grand opening, the directorate and researchers of the SPbIH of the RAS had a conversation with journalists about further cooperation.