Memorial halls of the outstanding scientist and collector N.P. Likhachev opened in the State Hermitage museum

12.12.2022 spbiiarhiv Без рубрики Comments Off on Memorial halls of the outstanding scientist and collector N.P. Likhachev opened in the State Hermitage museum 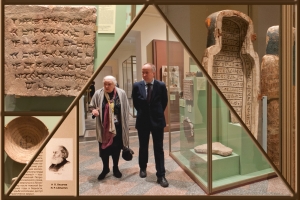 On December 10, 2022, the State Hermitage Museum opened a new permanent exhibition “Ancient writings of the Near and Middle East” in the gallery, which was named “Memorial Halls of the outstanding collector Nikolai Petrovich Likhachev”.

Likhachev’s collections were kept in his house on Petrozavodskaya Street, where St. Petersburg Institute of History of the Russian Academy of Sciences is now located. The scientist’s dream was to create a museum of writing. For some time such a museum existed, and Nikolai Petrovich himself was appointed its director. However, the end of the life of the “collector of a fabulous scale” is tragic – in 1930, N.P. Likhachev was repressed for the Academic case, the museum was closed, and the collections were distributed among several scientific institutions in Leningrad. A significant part of the collection ended up in the State Hermitage.

After the first acquaintance with the new exposition, the Director of St. Petersburg Institute of SHistory of the RAS Alexey Vladimirovich Sirenov noted:

It is significant that now they are paying special attention to N.P. Likhachev – a large exhibition dedicated to the Likhachev family, there is academic award for source study and auxiliary historical disciplines – in 2022 was the first award, now a wonderful permanent exhibition has opened in the Hermitage in the halls of the memory of Nikolai Petrovich, and we are opening Paleographic room of academician N.P. Likhachev, where Western European and Russian materials from his collection will be presented . Thus, both Nikolai Petrovich himself and his collection “sound”, we remember this, and this, of course, is our debt of memory to the great scientist, undeservedly overlooked by posterity.

For the preparation of the exposition, the archive of St. Petersburg Institute of History of the Russian Academy of Sciences provided a digital copy of the graphic portrait of N.P. Likhachev created in 1922 by the famous artist of Russian emigration V.D. Falileev.

The Hermitage owes many monuments of the Ancient East, as well as other parts of its collection, to N.P. Likhachev. In the four halls of the gallery (Nos. 85-88), next to the expositions of the Ancient East, there are written monuments of Egypt, Mesopotamia and other countries of the Near East, covering the period from the 4th millennium BC to the 4th millennium BC. until the end of the 1st millennium AD. Exhibits in this case are considered not as a source of historical information, but from the point of view of language, graphic forms of writing and pre-literate forms of information transfer, genres and appearance of documents. Getting to know the exposition requires work and concentration, but it provides an opportunity for an inquisitive visitor to learn a lot and get a taste of history.

Director of the State Hermitage Mikhail Borisovich Piotrovsky emphasized that

The Hermitage keeps the memory of Nikolay Likhachev all the time. There was a famous exhibition “Only letters sound”. We know him and remember him, therefore, when we began to prepare a new permanent exhibition, it became obvious that these halls should be dedicated to the memory of Nikolai Petrovich, and this will somewhat change the appearance of the exhibition. This exhibition is dedicated to a person, and not in general to a school-didactic topic about what writing systems are. But on the other hand, this is a story about the greatest invention of mankind. Now it is an exhibition connected with a special meaning. He collected various samples of writing, wanted to create a museum of writing, and now the topic of writing is very relevant in the world, when the world has forgotten how to read and write slowly.