29.12.2022 spbiiarhiv Без рубрики Comments Off on To the 255th anniversary of Metropolitan Evgeny (Bolkhovitinov) – a virtual exhibition of one document 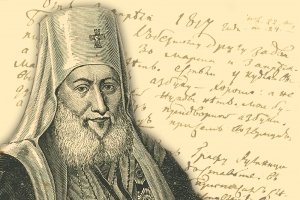 Metropolitan of Kyiv and Galicia Evgeniy (Efimiy Alekseevich Bolkhovitinov), the “Russian Miller” (as he was called in historiography) played one of the key roles in the formation and development of a number of humanitarian scientific disciplines – history, literary criticism, source studies, theology, etc. The archive of SPbIH of the RAS stores materials related to the life and work of Metropolitan Evgeny (Bolkhovitinov). In the collection of Nikolai Petrovich Likhachev (Coll. 238, inv. 2), draft notes and extracts made by him for his scientific works, official relations issued in the name of Metropolitan Eugene, as well as a whole complex of letters from the learned archpastor to various people were deposited. In his correspondence, Metropolitan Evgeniy appears as an enthusiastic interlocutor and an active scholar. Most of the letters were made on sheets from pocket notebooks, the edges of which were covered with gilding. The texts of the letters end with entries in Latin: “vive et nos amare perge tuus” (live and continue to love us), “tuus et amino” (your heart), etc.

Among them, letters to Vasily Grigorievich Anastasevich, a scientist and educator who was engaged in the transformation of the Vilna Academy, a person close to the circle of N. P. Rumyantsev, in whose work Metropolitan Evgeniy himself took an active part, stand out. In a message sent on April 9, 1817, the metropolitan calls V.G. Anastasevich as a “dear friend”, thanks for the two letters received and describes the outlandish thermometer “like a clock”.

The exhibition presents a fragment of a letter to V. G. Anastasevich and an engraved portrait of Metropolitan Evgeniy (Bolkhovitinov) from the collection of N.P. Likhachev.

The exhibition was prepared by E. S. Diligul

© When reprinting or using the materials of the virtual exhibition, the indication of the St. Petersburg Institute of History of the Russian Academy of Sciences as a source of information and the authorship of the compiler of the material is mandatory.