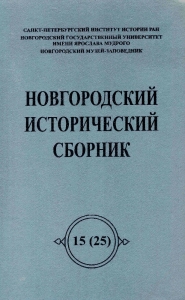 Novgorod historical articles (Novgorodskii itoricheskii sbornik). Issue 15 (25). Velikii Novgorod, 2015.
This issue includes articles and materials on the history and cultural development of Novgorod and its region in 12th-20th centuries. The problems of social and political relations, religion, administrative division, archaeology, historiography and Old-Russian architecture are discussed in this book. It also includes the publications of different old researches on the history of ancient Russian town.

Issue 15 is devoted to memory of academician Boris Vasilievich Ananich. 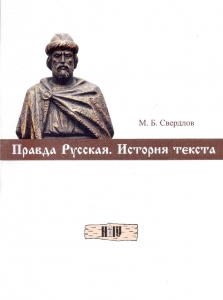 It presents a second edition, revised and enlarged of his early book “From Zakon Russkii to Russkaya Pravda” first published in Moscow in 1988. This new edition is dated to the 5th International scientific conference “Novgorodica-2015. From “Pravda Russkaya” to Russian constitutionalism”.

The scholar analyses the texts of Kratkaya Pravda (the Short Edition) and Prostrannaya Pravda (the Extensive edition), compares them with German legal codes what makes it possible to reconstruct the structure and contents of the state law of 10th century Russia and to trace the development of this law code in 11th and 12th centuries. 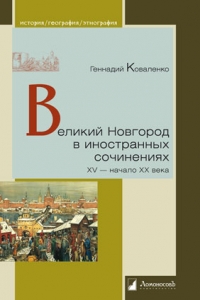 Velikii Novgorod being at the intersection of trade routes from ancient times drew attention of Europeans. Until the beginning of 18th century Europeans knew about this town more than about any other Russian towns except maybe Moscow and this information was presented in numerous works. They were usually biased, paid special attention to cultural differences and everything exotic what was regarded as usual for such a barbaric nation as Russians. Nevertheless it is important that foreigners noticed social phenomena, what makes it possible to imagine everyday life of Russian people of the past.

Saint Petersburg Institute of History has suffered a hard and unexpected loss. On September 14, 2015 we got information that one of the most outstanding scholars of SPbIH Sergey Viktorovich Yarov suddenly died in the age of 56 years. Sergey Viktorovich had been working in the Institute since 1988. Several scientific works recognized by both scholars and ordinary readers had been published by him in this period.

Sergey Viktorovich Yarov spent a lot of time working with post-graduate students and young scholars; he greatly contributed to their professional growth and development.

His devotion and capacity for work are to be remembered in perpetuity. Let the memory of this remarkable scholar, gifted pedagogue and extraordinary person live on forever.

The collection of articles and materials “The Decembrists: Topical course of studies” (“Dekabristy: Aktualnie napravleniya issledovanii”) composed by P.V. Il’in was published by Nestor-Istoria publishing house.

The book includes the articles by contemporary scholars on urgent issues concerning the history of the Decembrists. The papers touching upon the problems of the Decembrists’ of the ideas of European liberalism, of native tradition of palace revolutions, of Alexander I policy influence on the Decembrists are included in this collection.

Special attention is paid to study of secret societies, analysis of their leaders’ political activity, little-known personalities of the Decembrists and to attitude of society towards the Decembrists.

Background materials including complete information on topography and chronology of the Decembrists’ imprisonment in the Peter and Paul fortress based on the archive materials and unique information about the Commandant’s house of the Peter and Paul Fortress. The collection of articles concludes with the section on the Decembrists’ historiography issues.

The book is addressed to the specialists in the history of the 19th century Russia and to everyone interested in the Russian history.

The publication is done with the financial support of the Federal Agency on Press and Mass Communications of the Russian Federation within the framework of the Federal task-oriented program “The culture of Russia (2012-2018)”. 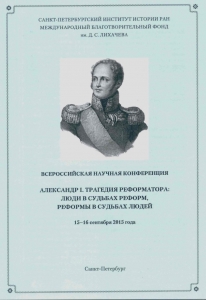 The opening of the conference will take place on September 15 at 10.30 a.m. in the conference hall of SPbIH (Petrozavodskaya str., 7; Chkalovskaya metro station).

The reading hall of the institute archive will be closed for visitors on September, 16 due to the conference meetings.

26.08.2015 admin Без рубрики Comments Off on On the 90-year anniversary of the Paleography museum of the Academy of Sciences of the USSR establishment

From September 12 till October 25, 2015 at the New building of the National library of Russia (Saint Petersburg, Moskovsky prospect, 165-2), in the hall of the second floor the exhibition “The collection of books and manuscripts of academician N.P. Likhachev (1862-1936): on the 90- year anniversary of the Paleography museum of the Academy of Sciences of the USSR establishment” will take place.

Welcome for all comers!

Saint Petersburg Institute of History of the RAS suffered an irreparable loss. One of the most outstanding scholars of the Institute Boris Vasilievich Ananich died on July 20, 2015 in the age of 84 years.
Boris Vasilievich has worked in SPbIH since 1956. Being a striking representative and a passionate patriot of the Petersburg school of history studies he was one of the most prominent specialists in the Russian history of the second half of the 19th – beginning of the 20th century, whose books and articles were well known by both home and foreign scholars and could be included in the capital of Russian science.

Boris Vasilievich was a wonderful man, democratic, cordial and really decent. He supported a lot of people and educated and trained a whole pleiad of progeny.

His death terminates an epoch in history of the Institute.

Let an outstanding scholar and honorable person be remembered forever.

Civil funeral will be on July 25, 2015 in the Saint Petersburg Institute of History of the RAS  at 12.00.
The funeral will take place at Smolenskoye cemetery at 14.00.