The scientific edition of the diary of Nadezhda Nikolaevna Platonova (1861-1928) – the wife of the famous historian, professor of St. Petersburg University, academician Sergei Fedorovich Platonov is presented to the reader. Nadezhda Nikolaevna, a graduate of the Bestuzhev Courses, was not just “married” to a famous scientist, she was in the full sense of the word his assistant, associate and like-minded person, and her own works left a noticeable mark on historical science. The diary covers the period from the late 1880s to the early 1920s and is a valuable source both on the history of science and academic life of St. Petersburg (Petrograd), and everyday life, the life of the intelligentsia at the turn of the 19th-20th centuries. One of the central themes of N.N. Platonova – the relationship between power and society in Russia. The text clearly reflects the violent social cataclysms of the first decades of the 20th century – revolutions, World War I and the Civil War, the end of the old regime, the beginning of the process of Sovietization of Russian higher education. Leading representatives of the intellectual and political elite of the empire, and then of the new, Soviet Russia, appear in different focus on the pages of the diary.

The publication will be interesting not only for historians, but also for everyone interested in culture, everyday life, and the atmosphere of life of Russian society in the late 19th – early 20th centuries.

We invite you to take part in the XXII All-Russian scientific conference “Scribes and other mass sources on the history of Russia in the XVI-XX centuries.”.

The conference is dedicated to the memory of an outstanding scientist and remarkable person who left us six months ago, as an understanding of the scientific heritage and the continuation of the main work of his life – a comprehensive study of the history of the Russian literature and social thought of the 19th-20th centuries.

The conference will be held in a mixed format using the Zoom platform.

16.02.2021 admin Без рубрики Comments Off on International scientific conference on the 80th anniversary of the beginning of the Great Patriotic War

The organizers listed above invite you to take part in the international scientific conference“1941. The Northern border. To the 80th anniversary of the beginning of the Great Patriotic War”, which is to be held on June 16-17, 2021.

On April 23-24, 2021 in Vitebsk (Belarus) the VI International scientific-practical conference “Actual problems of source study” will be held. SPbIH of the RAS is one of its organizers (together with Vitebsk State University named after P.M. Masherov, State Archives of Vitebsk Region, Belarusian State University, Republican Institute of Higher Education, Kharkiv National University named after V.N.Karazin). Submission of applications and texts of the report is possible until March 20.

To the Day of Russian Science

06.02.2021 admin Без рубрики Comments Off on To the Day of Russian Science 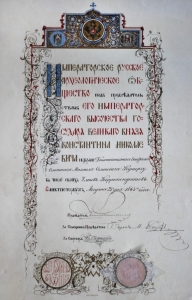 by decree of the Governing Senate, by order of Emperor Peter the Great,

the Academy of Sciences and Arts

was established in St. Petersburg.

According to the plan of Peter the Great, it was to become not only a scientific, but also an educational institution. A university and a gymnasium were created at the Academy to train personnel of Russian scientists. On January 7, 1726 (December 27, 1725), the first ceremonial meeting of the Academy of Sciences and Arts was held, which was attended by several hundred people. Among the academicians were outstanding scientists – mathematicians Daniel Bernoulli and Leonard Euler. The first Russian adjunct was V.E. Adodurov, the first Russian professors – M.V. Lomonosov and V.K. Trediakovsky. In 1755, on the initiative of M.V. Lomonosov and I.I. Shuvalov, Moscow University was founded. At the beginning of the XIX century. in Russia, a unified system of higher education began to take shape. In 1804, by decree of Emperor Alexander I, a charter was adopted, according to which the Moscow, Kazan and Kharkov universities carried out their activities.

To the Day of Russian Science, the staff of the SPbII RAS prepared a virtual exhibition “Documents on the history of science and education in Russia and Western Europe in the collection of the Scientific and historical archive of the SPbII RAS (diplomas, certificates, certificates”. The exhibition presents diplomas from universities in Russia (XIX – XX centuries) and Western Europe (XVI – XVII centuries), as well as diplomas and certificates issued by the Russian scientist Academy of Sciences and scientific societies. The exposition is completed with diplomas, certificates, certificates and awards from the personal funds of the employees of the Leningrad branch of the Institute of History of the Academy of Sciences of the USSR Academy of Sciences – S.N. Valk, B.A. Romanov, A.V. Predtechensky, I.I. Smirnov.