22.12.2015 admin Без рубрики Comments Off on “These deeds won’t pass away…” On 190-year anniversary of the Decembrist uprising” 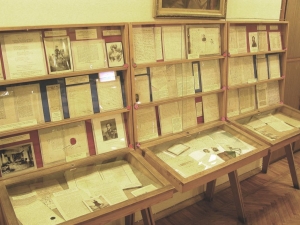 On December 16, 2015 the exhibition “These deeds won’t pass away…” On 190-year anniversary of the Decembrist uprising” has been opened at the Reading hall of Scientific and historical archive of SPbIH of the RAS. The first visitors have been participants and guests of the International scientific conference “Historical memory” of Russia and the Decembrists. 1825-2015”.

Three sections of the exhibition contain documents on the history of the revolt in the Senate square and on the tragic destiny of the Decembrists and members of their families.

Manuscripts (letters, notes, etc.) and other materials from personal fund of Vassily Petrovich Ivashev (1797-1841), who was the member of “The union of welfare” and then of “The Southern society”, form the central section. Although V.P. Ivashev didn’t participate in the revolt itself being in long-term furlough at his parents’ estate in Simbirsk region, after his return in January 1826 he was arrested, kept in Peter and Paul Fortress and then he was sentenced to 20-year penal servitude. 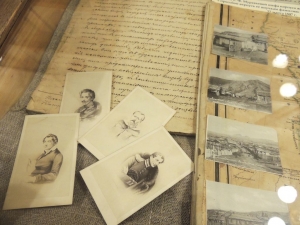 The exhibition also includes materials on different aspects of the study of the Decembrists movement history. Among them there is a lithogranewspaperph of A.I. Herzen’s letter to Alexander II on the third edition of court historiograph M.A. Korf’s book “Emperor’s Nicholas I accession to the throne” published in “Kolokol” in 1857, then hand-written copies of Decembrists’ wives’ letters sent from Siberia, press-cuttings from newspaper and journal articles on the first jubilees of the Decembrist uprising kept in the collection of famous genealogist A.A. Sivers (1866-1954) and some other documents and materials are presented for the visitors.