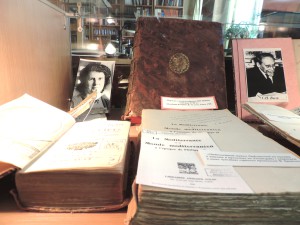 The history of the library for the last 80 years is firmly connected with the history of the Institute. The library keeps not only the works of all the Institute scholars but also books they presented during their lifetime, bequeathed to the library, etc. Dedicatory inscriptions which are plentiful at the books of scholars of 20th century reveal circumstances of acquisition of one or another work, scholarly and friendly contacts and finally the atmosphere at the institute. At the exhibition books from former libraries of N.S. Chaev, academician S.A. Zhebelev and K.N. Serbina are demonstrated. True bibliophiles were V.I. Rutenburg and A.A. Fursenko. The collection of V.I. Rutenburg is represented by the works on Medieval period in foreign languages. Among A.A. Fursenko’s collection, which consists mostly of Russian and foreign works on the history of the USA and on the history of the 20th century, two books that got to the library from Rockefellers’ office in New York (with the stamp of office’s library and A.A. Fursenko’s dedicatory inscription) owing to A.A. Fursenko are represented.