25.03.2022 admin Без рубрики Comments Off on The Museum of the North-Western Front (Staraya Russa) hosted a round table dedicated to the 100th anniversary of the adoption of the decree of the All-Russian Central Executive Committee “On the procedure for the seizure of church property in the use of groups of believers” 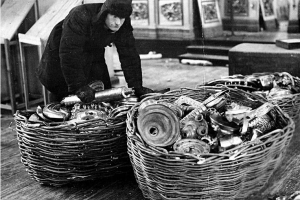 Agreement on cooperation between SPbIH of the RAS and gymnasiums

21.03.2022 admin Без рубрики Comments Off on Agreement on cooperation between SPbIH of the RAS and gymnasiums

The project “Faculty of Social Sciences” is aimed at motivating secondary school students for deeper training in the humanities and admission to specialized educational institutions. An agreement between gymnasiums (Gymnasium No. 67, Gymnasium No. 70 and Gymnasium No. 85 of the Petrogradsky District) and St. Petersburg Institute of History of the Russian Academy of Sciences as the first experience of its kind in the interaction between an academic institution and secondary schools opens up the opportunity to conduct practical classes in the archive (based on unique documents collections of academician N.P. Likhachev), to acquaint high school students with various areas of historical science and teach the basics of working with documents, to form heuristic skills in the analysis of written sources.

END_OF_DOCUMENT_TOKEN_TO_BE_REPLACED

The Faculty of Social Sciences

17.03.2022 admin Новости Comments Off on The Faculty of Social Sciences

The ceremony of signing the cooperation agreement and the start of the program “The Faculty of Social Sciences” will be held on March 18 at the SPbIH of the RAS. The project is being implemented by educational institutions of Petrogradsky district in cooperation with organizations of science and higher education. On the same day, the first field lesson of schoolchildren will take place. They will see how a real archive works, get acquainted with the written monuments from its collections.
The idea of the program “The Faculty of Social Sciences” is to acquaint motivated schoolchildren who are interested in the humanities in more detail with various areas of historical science – source study, auxiliary historical disciplines, features of working with manuscripts, etc. The final goal of such a professional orientation of students is to encourage them to more in-depth preparation and admission to specialized educational institutions.

“Archival history” – Church for the benefit of the state

03.03.2022 admin Без рубрики Comments Off on “Archival history” – Church for the benefit of the state

Social, economic and spiritual grounds of the Church reform of Peter the Great on the bais of the documents from collections of Northern monasteries and archbishops’ houses. Senior researcher Cand. Sc. in History Nikita Bashnin tells the audience about the collection of docuements on this issue in program “Archival History”.

24.02.2022 admin Без рубрики Comments Off on Autograph of History – Alexandrian sauce according to the recipe of “Collection of Apicius”

Can a cookbook serve as a historical source? If this is a copy of an ancient book of the 4th-5th centuries, then the researcher extracts a large amount of information from it. Cand. Sc. in History Ekaterina Nosova, a researcher at the Scientific and Historical Archive of St. Petersburg Institute of History in the program “Autograph of History” reports about such copy from the Archive funds.

17.02.2022 admin Без рубрики Comments Off on “Autograph of history” – the genealogy of the nobles of the Linevs kin