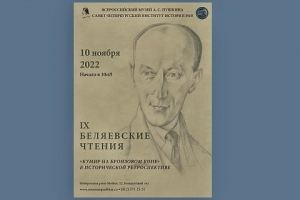 The 9th Belyaev Readings, organized by the All-Russian Pushkin Museum and St. Petersburg Institute of History of the Russian Academy of Sciences, will be held on November 10, 2022. This year, the theme of the Belyaev Readings is “Idol on a Bronze Horse” in a historical retrospective”. The conference examines the image of Peter the Great in creative work of A.S. Pushkin, combining the research efforts of Pushkinists and historians from Moscow, St. Petersburg and other regions of Russia.
The agenda of the Readings (in Russian).

All-Russian Scientific and Practical Conference “The Likhachevs. Life as a Service to the Fatherland”

09.11.2022 admin Без рубрики Comments Off on All-Russian Scientific and Practical Conference “The Likhachevs. Life as a Service to the Fatherland” 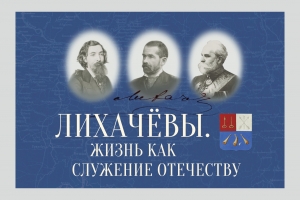 At the scientific forum, it is planned to discuss subjects that reveal the significance of the Likhachev family in the history of Russia, their activities, scientific research, and ministry. Among the sections of the conference are researchers from the St. Petersburg Institute of Science and Technology, Russian Academy of Sciences. 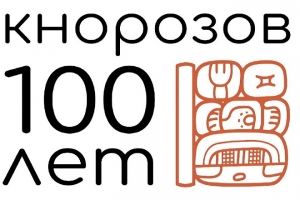 The seminar will take place on November 10, 2022 at SPbIH RAS (Assembly Hall), beginning at 12.00. The program of the Scientific Seminar 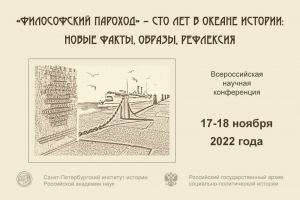 The “Philosophers’ Steamboat” is one of the controversial and discussive issues for the history of Russia. The events denoted by this phrase are a kind of symbol of the dramatic split of the unified culture of Russia into the intellectual and cultural space of the Russian Diaspora and the Soviet Russia. Largely because the circumstances associated with the expulsion of a large group of intelligentsia from Soviet Russia in the autumn of 1922, even 100 years later, attract close attention of not only specialists, but also everyone who is interested in the history of Russian culture and science.

Addressing this event today is an opportunity to return to historical sources, to comprehend the place of Russian social and philosophical thought in the world socio-humanitarian tradition, to trace successive lines and perspectives.

On the occasion of the 100th anniversary of the “Philosophical Steamboats”, the St. Petersburg Institute of History of the Russian Academy of Sciences and the Russian State Archive of Socio-Political History are holding the All-Russian Interdisciplinary Scientific Conference “Philosophical Steamboat – One Hundred Years in the Ocean of History: New Facts, Images, Reflection”.

The conference will be held on November 17-18, 2022 at St. Petersburg Institute of History of the Russian Academy of Sciences in full-time and remote format.

Following the results of the conference, it is planned to publish a collection of reports. 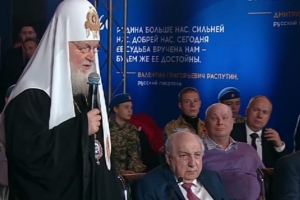 07.11.2022 admin Без рубрики Comments Off on History of the Time of Troubles – video lectures in the Presidential Library 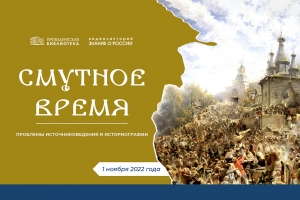 On November 1, 2022 at the Presidential Library within the framework of the project “Knowledge about Russia” a video lecture “Time of Troubles. Problems of source studies and historiography” took place. The event was timed to the Day of National Unity.

Research and restoration of manuscripts – the 3rd conference

28.10.2022 admin Без рубрики Comments Off on Research and restoration of manuscripts – the 3rd conference 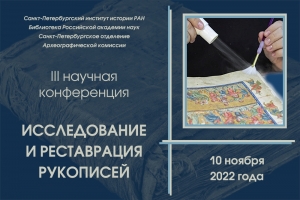 Within the framework of the conference, there will be a tour of the exhibition “Restoration of Manuscripts of the BAN” based on the materials of the exhibition “The History of Writing from Byzantium to the Old Believers”, which will be held by the head of the NIOR BAN M.V. Korogodina.

As a result of the conference, it is planned to publish a collection of works.