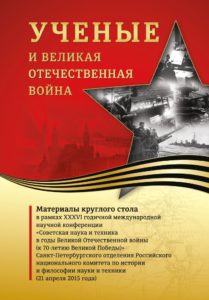 Publishing house of Politechnic University issues the collection of articles containing Materials of the round-table discussion carried out during 36th annual international scientific conference “Soviet science and technics during the Great Patriotic War (On 70-year anniversary of the Great Victory)” which is entitled “Scientists and the Great Patriotic War”.
The book is one of the unique academic publications dealing with the activities of the scientists and scientific organizations during the Great Patriotic War. It includes articles, greetings and memoirs of the participants and veterans of the war. The publication has been timed to 70-year anniversary of the Great Victory.
Contents of the collection of articles (in Russian).