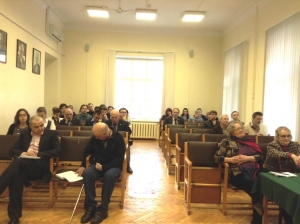 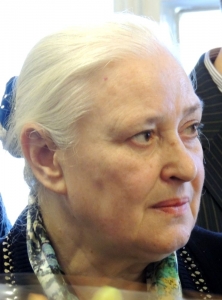 25.03.2016 admin Без рубрики Comments Off on On 85-year anniversary of academician B.V. Ananich

On March 22, 2016 at Saint Petersburg Institute of History of the RAS (SPbIH of the RAS) memorial session of the Scientific council dedicated to 85-year anniversary of academician, D.Sc. in History, professor B.V. Ananich took place.

The meeting was opened by the report delivered by A.N. Tsamutali who outlined different aspects of B.V. Ananich’s course of life and main features of his work as a historian.

Academician A.B. Davidson delivered to the audience his memories about co-study with B.V. Ananich at Leningrad university and their friendship.

Director of SPbIH of the RAS N.N. Smirnov noted role of B.V. Ananich both as an outstanding scholar and as benevolent and kindhearted person.

Exhibition timed to 85-year anniversary of B.V. Ananich at the National library of Russia

14.03.2016 admin Без рубрики Comments Off on Exhibition timed to 85-year anniversary of B.V. Ananich at the National library of Russia

On March 16, 2016 at the New building of the National library of Russia (Moskovskii pr., 165) the exhibition “Academician Boris Vasilievich Ananich and Petersburg school of history” timed to 85-year anniversary of the scholar will be opened. Outstanding representative of Petersburg school of history, great historian, member of the Russian Academy of Sciences, Doctor of Science in History, professor B.V. Ananich (1931-2015) greatly contributed to development of home historiography and teaching of history at university level in Russia. Being prominent specialist on history of international relations of Modern era, internal policy of Russia of 19th-beginning of 20th century, history of economics and finance he belonged to brilliant generation of employees of Leningrad branch of the Institute of History of the Academy of Sciences of the USSR (since 2000 – Saint-Petersburg Institute of History of the RAS).

The exhibition composed in collaboration by the National library of Russia and Saint-Petersburg Institute of History of the RAS presents to the visitors items from several departments of the library and documents and illustrative materials from both Scientific and historical archive of the Institute and family archive of the Ananich kin. Basically there are published works, photos and biographic matter.

The exhibition consists of several sections. The greatest one includes the works of B.V. Ananich which reflect his formation as a historian, development of his views as a scholar, main courses of research and importance of his legacy for evolution of Russian historical knowledge of 1960s-2010s. Materials on B.V. Ananich’s civic stand and public activities are also represented there.

Special section presents to the visitors materials about other outstanding representatives of Petersburg school of history, both tutors and colleagues of B.V. Ananich, such as B.A. Romanov, S.N. Valk, V.G. Chernuha, V.S. Dyakin. There are photocopies of manuscripts of works, autobiographies, letters and rare photos from personal funds of these scholars kept at Scientific and historical archive of Saint-Petersburg Institute of History of the RAS. 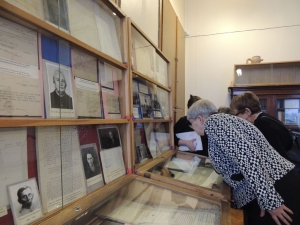 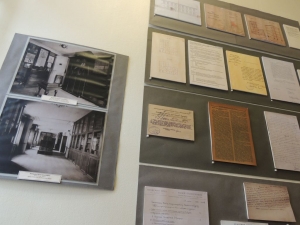 A lot of items reflect the work of the Institute during the Great Patriotic War. In particular the lists of employees of the pre-war and war periods composed by D.I. Petrikeev on the basis of archival documents are presented. Copies of documents from personal fund of K.N. Serbina reflect her life and activity as Institute’s employee during the siege of Leningrad. END_OF_DOCUMENT_TOKEN_TO_BE_REPLACED